Pieces of Eight - my autobiography

This is a large piece of work, based in an artists water colour box. The title, ‘Pieces of Eight’ refers to the fact that I have six children, so there were eight in our family.

The top green boxes are: 'dad' - 'the boy' - 'girly' and 'mum' - my brother and I were never called by our names. Inside each box are eight things that either belonged to, or remind me of that person - the images at the bottom of this page show the contents of the 'girly' box (mine).

The six large bottles on the left are my six children, again each of the bottles has eight items in it - and the four smaller ones are my grandchildren. The contents of the 'JRM' bottle are shown in the last image on this page, Noddy badges from favourite childhood, Yoda because he was born in the Star Wars era books, a fire engine because he is a fire fighter, a spurs badge, an oil bottle because he done an apprenticeship in mechanics - each bottle has a marble, a school name tag and a domino, JRM has the double one because he was my first born - APM has a double two because she was the second to be born - NRM a double three - RPM a double four - CRM and double five and FMLM has the double six!

There are tiny leather baby bootees, cotton reals, bottles and boxes of things I have collected, six quail eggs wrapped in silver wire to show that although my six children have flown the nest, they are still bound to me by our heart strings. The stack of paper was made from plants in my garden. There are also six miniature books, the contents of two are pictured below.

On the other side of the box there is a window (to my soul?) inside there are 25 opaque scrolls tied with cotton, the bottom ones hold my deepest regrets, the middle ones are my blessing and the top ones hole my hopes and aspirations - to remove them would destroy them as they are firmly held in place. 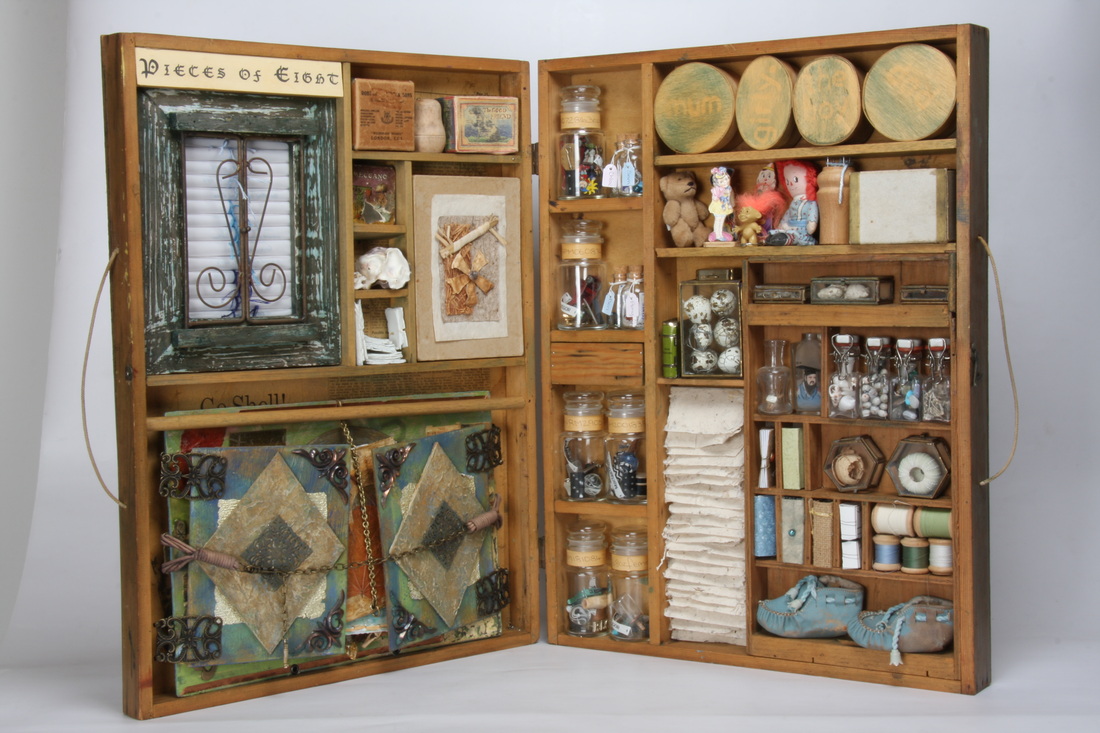